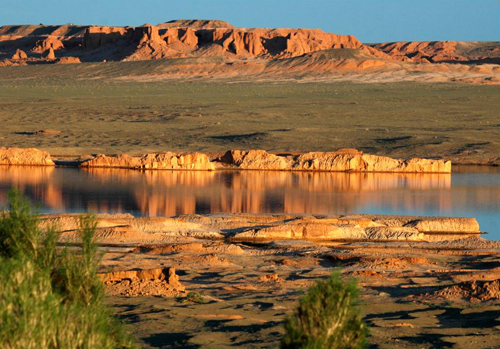 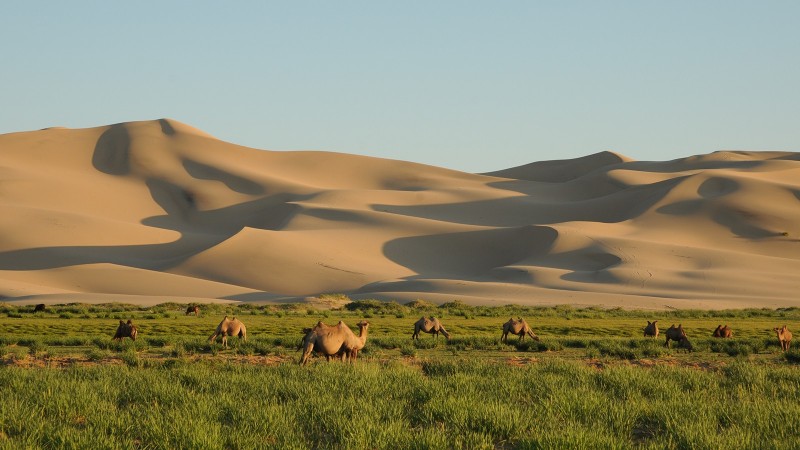 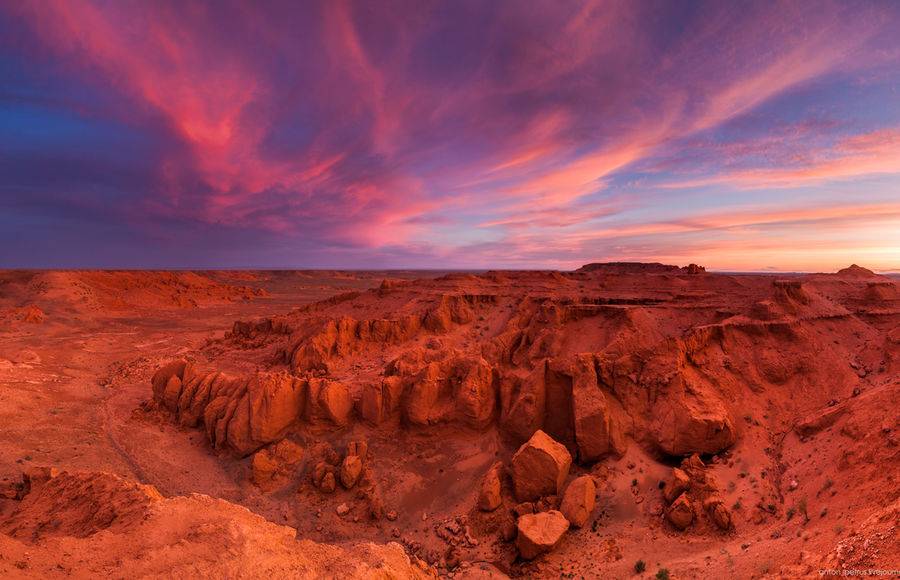 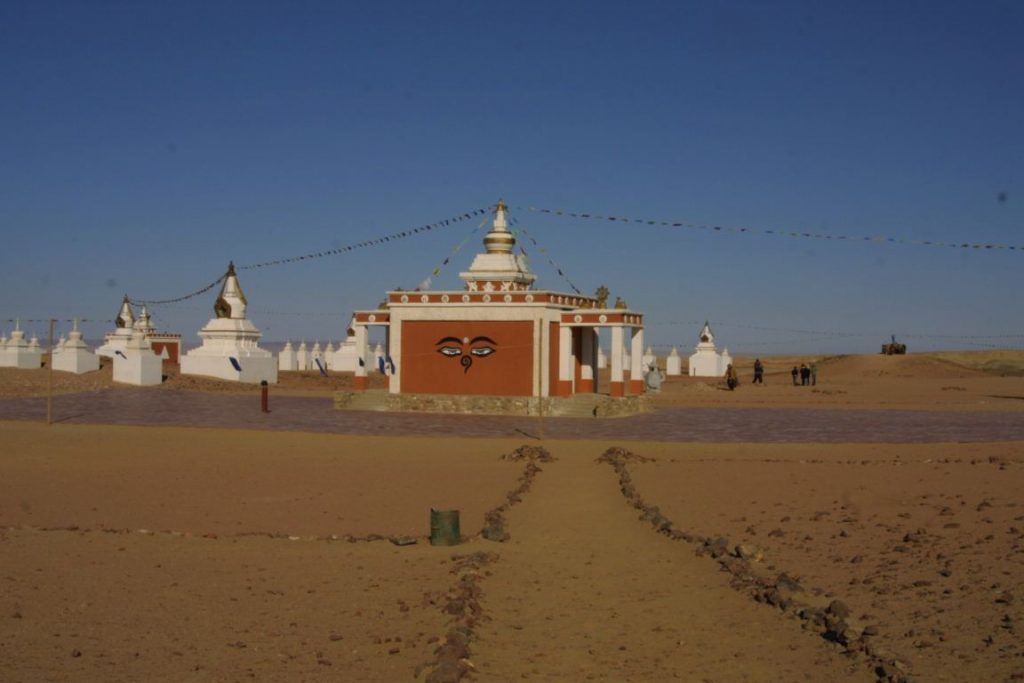 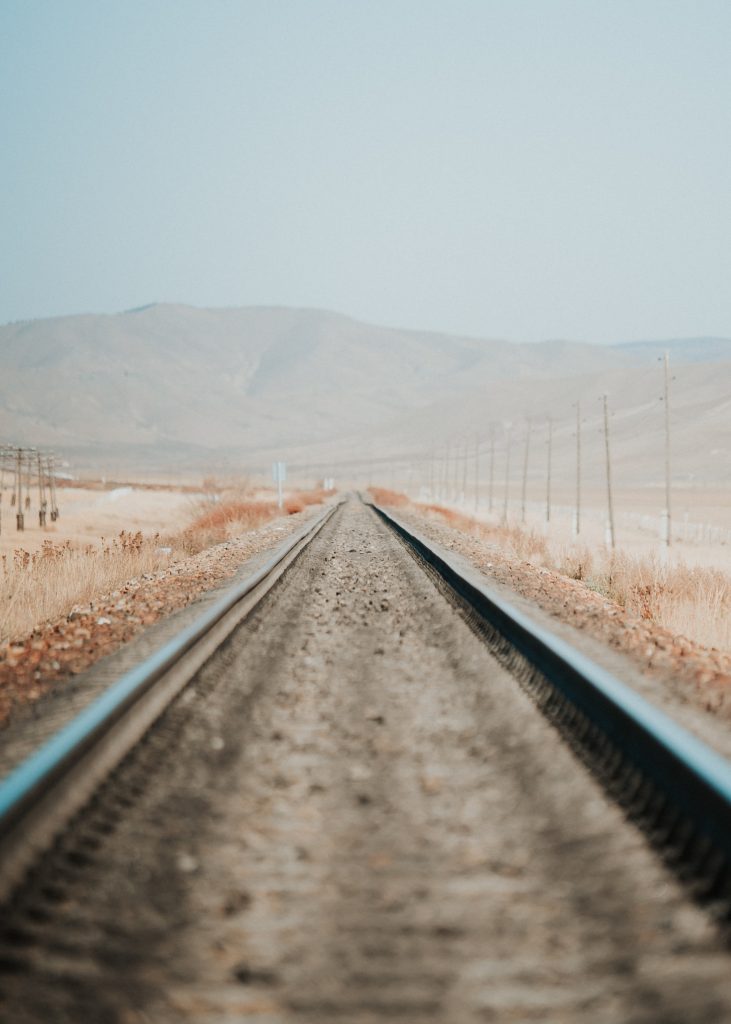 The Gobi Desert is a term for a semi-arid territory populated by nomads. Do you know that there are 33 different Gobi in Mongolia?

Galba Gobi, the largest and most deserted of all, has a strong attraction for its natural and energetic peculiarity, on top of its historical importance. You may know of it as being one of the crossing points and most difficult passage for caravans on the legendary Silk Road.

Arrival at the Chinggis Khaan international airport in Ulaanbaatar, thecapital city of Mongolia. Your guide-interpreter and driver will welcome you at the airport and lead you on the city tour. The capital has plenty to offer. On the tour you will visit the Gandan Monastery, a historical and spiritual Buddhist temple in the city. Then you can walk around the National History Museum and the Chinggis Khaan Square in front of the Mongolian Parliament house to help you get a general knowledge and information about the Mongolian history and culture.

With your guide and driver in a private vehicle, you will leave the capital and ride to the “Khogno Khan”, called the Central Gobi, one of the 33 “Gobi” (a local word for “Desert”) in Mongolia. On the way you visit a nomadic family, settled in the middle of the pastures. Upon visit, you can have a taste of “White food” and notably Airag, a traditional drink made from fermented mare’s milk. The “white foods” derived from milk occupy a very important place in the diet of the Mongols, as well as symbolically and ritually.

Early in the morning, you will depart to Karakorum. Upon arrival start the tour of Karakorum, the ancient capital of the Mongol Empire during the time of Chinggis Khaan (1162-1227). The current city of Karakorum is above all the seat of the best-known monastery in Mongolian territory: Erdene Zuu. Now it is a small town in the middle of the grasslands. There are some remains of the city scattered to see around. However, most stones of the old buildings were later used to build the nearby “Erdene Zuu” Monastery.

Erdene Zuu means’ hundred treasures. The building dates from 1586 and once consisted of more than a hundred temples. Sadly, the complex has been subjected to many political ups and downs, at last being actively restored since 1990 around twenty remain today. It is one of the cultural and spiritual highlights in Mongolia. The complex is fully fenced and every fifteen meters there are stupas, 108 in total, in the walls.

Continue to Arvaikheer, the capital of the region. You will be visiting the museum of ethnography and history of the region, as well as the memorial hall of His High Holiness Zanabazar, the first Buddhist spiritual leader of Mongolia.

Today, you descend south towards Bogd soum, a small village on the northern edge of the Gobi desert. This village of a few thousand inhabitants lives mainly from felt work, the famous goats cashmere from the “Gobi” clothing brand, and from agriculture.

After you arrive in Bogd you’ll have a short trip to the petroglyphs of Tevsh Mountain dating from the Bronze Age. Not far from the village, you’ll stay overnight with a nomadic family of camel herders and can discover the life of a camel herder.

Continuing the trip, you arrive at the national park of Khongor with its spectacular sand dunes like Duut Mankhan, meaning the singing dune. The dunes extending up to the foot of the high Altai Mountains range, lie about 180 kilometers from Dalanzadgad. It is at a distance of 130 kilometers along the desert tracks to Bogd in Uvurkhangai in the north, and 215 kilometers to Bayanlig on the northwest in Bayan Khongor. The optimal tour through the desert is either by camel rides or by cars with drivers who are knowledgeable about the desert.

Day 6
Day around the Khongor Dunes

This day will be spent in the area, climbing and walking the dunes. Some are up to 200 meters high. The dunes cover an area of approximately 20 kilometers wide and more than 100 kilometers long! It is intense to climb to the tops of the sand dunes and with much effort, you can overcome the sand hills. In the end, the reward is the incredibly beautiful view of the whole desert.

If you want, you can choose to have a tour riding a camel /OPTIONAL/

You can also take advantage of this day to make friends with the camel herders who live in the region, and to understand their particular traditions and way of life.

On this day, your team will reach the Gurvan Saikhan National Park. The park hosts more than 200 bird species and you can find more than 600 different plant species. There are gazelles, gerbils and even snow leopards. After visiting the small museum of Yoliin Am (“Vultures valley” in Mongolian), you can take a nice stroll through the valley which ends by a chasm. If you are lucky you can see one of the massive vultures who habit there, which also gives their name to the valley.

On foot or on horseback, you move into the groove formed by the riverbed, and might be surprised to find a small hidden glacier believed to be eternal.

After breakfast, with your team you will depart to Bayanzag, also called the Flaming Cliffs (Flaming Rocks). The rocky landscape gives a glowing orange color, like its name suggests. This is the region, in the Gobi Desert, where dinosaur fossils have been found. American paleontologist Roy Chapman Andrews gave this region its name after he visited it and found dinosaur eggs in 1920. These eggs not only established that all the dinosaurs were oviparous, but also inspired a certain Steven Spielberg for Jurassic Park. Other discoveries have also been made in the area such as the remains of a velociraptor.

Early in the morning, you’ll head towards the Demchig Monastery, one of the 3 great centers of Buddhism in the Gobi Desert. This former monastery is located on an energy center “scientifically proven” to be effective within a radius of 30km. After being destroyed by the communists in the 20th century, it was rebuilt in 2007 and now is composed of 7 stupas. The main one, sheltering a god, would be the largest in Mongolia.

FB, Overnight in a guesthouse

Today you’ll take off in the direction of Sainshand, via Khanbogd soum. In recent years, the small village has been rapidly developed by virtue of a large gold and copper mine called “Oyutolgoi”. On the way, you’ll pass by the mine, recently discovered and developed by a Canadian firm. There are lots of trucks traveling between the mines and the Chinese border to transport these minerals.

The township of Khanbogd is located in the desert of Galbiin Gobi, which was once the bottom of an ancient ocean. This is the reason why important Paleontological findings have been made there.

You will begin your spiritual “retreat” by early departure to the Khamriin Khiid monastery to attend the Buddhist prayers. The Khamariin Khiid monastery is one of the gems of Buddhist architecture in the tradition of the Tuvkhun hermitage. These are small monasteries in remote places, which have become a popular pilgrimage site for the Mongols. Peculiarly, unlike the majority of monasteries and temples of Mongolia belonging to the sect of “Yellow Caps” Buddhism, this one belongs to the sect of “Red Caps” Buddhism. The latter has incorporated many esoteric practices (magic, divination, sacrifice) and has less strict rules of life than those of the Yellow Caps, although both are related to Tantric Buddhism. The Khamariin Khiid monastery has “two sister” temples; Ölgii Khiid and Demchig Khiid, both also in the Gobi region.

You will be able to take advantage of this day to deepen your Buddhist exploration or visit the surrounding sites which are full of treasures: meditation caves, “sakura” trees, dinosaur bones (considered sacred in ancient times as “dragon bones”), fossilized wood, etc.

In the area, you can reach one of the most important and sacred places in Buddhist mythology: Shambala, a gateway to the kingdoms of the Righteous. An extremely popular place of pilgrimage, it attracts many believers who come here to recharge or absorb the particular magnetic energy that emanates from the earth.

In Tibetan mythology, Shambala is the name given to a legendary kingdom in Central Asia, but whose precise location remains unknown; a haven of peace, where all the inhabitants would live in joy and harmony, a kind of Garden of Eden. Other interpretations, however, attribute to Shambala a more spiritual and abstract nature, and do not see it as a real physical place in the strict sense.

Early in the morning, your team will hit the road to Sainshand to take the train back to Ulaanbaatar.

On the way, you’ll pass the Khar uul, or the “black mountain”, a sacred mountain renowned for granting wishes! The visiting locals and pilgrims write their sins on small papers before burning them on an altar, and then go and shout their wishes to the wind on the side of the mountain!

After arrival in Sainshand you can go visit Danzanravjaa’s museum (1803-1856), who was the founder of the Khamariin Khiid monastery, which you visited earlier. As a leading figure in the 19th century, Danzanravjaa was recognized as a living Buddha and king of the Gobi. Writer, poet, playwright… and a traditional doctor, he was a politically influential figure as much as artistically. The museum contains over 1,500 varied works (books, gods, etc.), thanks to Tudev and his heirs, former curator of the Gobi kings, who secretly hid more than a hundred boxes from the communist authorities.

Finally, you will take the train to Ulaanbaatar in the evening.

FB, Overnight on the train

You’ll arrive at the capital early in the morning. After having breakfast you will be dropped off at your hotel. Take this time to have a little rest, then you’ll go shopping in the State Department Store, the largest shopping mall in Mongolia, a leftover of the Soviet occupation. There, you can find cashmere, leather, and whatever you want for souvenirs, presents and gifts. 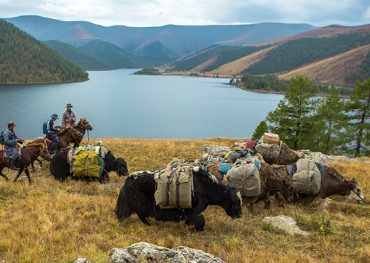 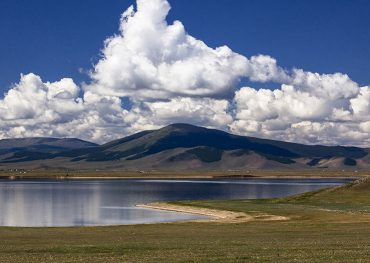 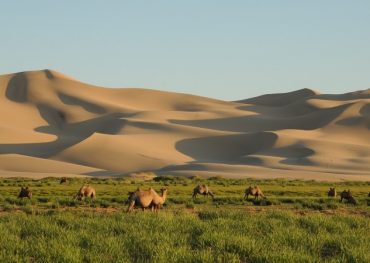 $ 1,400 You have group discount in this trip.Group Discount 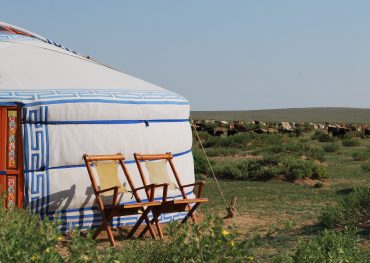 $ 1,090 You have group discount in this trip.Group Discount

Out of NowHere: Comfort in Geolodges 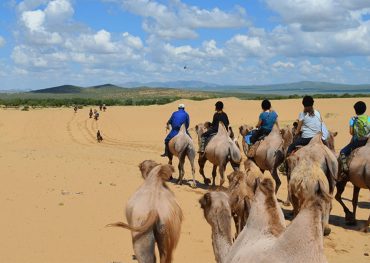 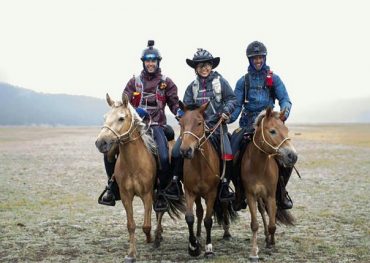